To share your memory on the wall of Ralph \"Jody\" Hines, sign in using one of the following options:

“Jody” was born May 20, 1936 in Tucson, Arizona the oldest son of Joe Hines and Helen Josephine Dangelmaier Hines. The family returned to Kansas from Sells, AZ when Jody was 3. Over the years Jody was able to visit his birthplace a few times, most recently 10 years ago during a winter trip with his wife. Jody attended the one room Cherry Lane Grade School north of Olathe where his mother also attended school and he was a 1954 graduate of Olathe High School.
While attending high school Jody met his high school sweetheart and eventual wife of 66 years Barb. Everything that Jody and Barb did together was as a team and they worked side by side throughout life to build their legacy together. They were the proud parents of John (Sandy) and Jeff (Cammie), their two sons that they raised on the family farm north of Olathe.

Jody worked a handful of different jobs when he was first married, handling mail at Union Station, sorting cattle at the Kansas City Stockyards, working in a locker plant and eventually working at the Delco Plant in Olathe before leaving his last job in town to run the family farm. Jody was a dairyman for more than 25 years while row crop farming and running a cattle operation. In November 1995 Jody and Barb purchased their current farm near Parker, KS where they have lived since 2000. Jody built an 8 acre “dream” lake on their new farm and thoroughly enjoyed allowing friends, neighbors and family to come down and fish or use the duck blind on the pond.

Jody had a lifelong passion for the great outdoors. He was an avid outdoorsman enjoying raising bird dogs, deer hunting, elk hunting, moose hunting, running a trap line, and more than anything fishing with his friends and family. Jody was an excellent fisherman. Jody and his family made 60 consecutive fishing trips to Corn Lake near Redditt, Ontario in Canada. During these annual trips Jody made many great friends, many whom he considered to be his family. These trips were planned and looked forward to the entire year as a reprieve from work on the farm.

In 1974 Jody became a member of the Spring Hill Masonic Lodge, where he was a past master, a membership that spanned more than 45 years. Jody was an excellent recruiter of good men and encouraged dozens of others to join over the years. He always looked forward to performing the First Degree as he welcomed a new brother into the fraternity. Jody was active in the Abdallah Shrine Temple where he was involved in the Oriental Band. Over the years he served as the Oriental Band President and was the Director of the Central States Shrine Association of Oriental Bands, an honor that he was very proud of. Jody and Barb met many lifelong friends through the Shrine and enjoyed several trips with friends over the years including cruises to Alaska as well as the Caribbean. Jody was a strong supporter of the Ladder of Smiles, sponsored by Abdallah Temple, a fund that raises monies to support the mission of the St. Louis Shriner’s Hospital for Crippled Children.

Jody had commented many times over the years that he was born at the perfect time. Growing up in a time where indoor plumbing and electricity were not available until he reached high school. He often talked about seeing the world move from horses and plows to all the conveniences of modern life. Many of his fondest childhood memories were from bouncing around in an old stock truck with his Dad and Grandpa as he rode around with them as they traded cattle throughout the countryside. The importance of family was a lesson that he learned early in life and one that followed him throughout.

Jody is survived by his wife Barb, of the home, sons John (Olathe) and Jeff (Parker), five grandchildren; Clint, Jeff, Jennifer, Keaton, Lindsey and nine great-granddaughters. Jody was preceded in death by his parents and his brother Tom.

Thank you to all the doctors and nurses in ICU at Olathe Medical Center for excellent care of "Jody" Hines and his family.
Read Less

Receive notifications about information and event scheduling for Ralph "Jody"

We encourage you to share your most beloved memories of Ralph "Jody" here, so that the family and other loved ones can always see it. You can upload cherished photographs, or share your favorite stories, and can even comment on those shared by others.

Larry and Jackie Fliss, Carter and Jackson sent flowers to the family of Ralph "Jody" Hines.
Show you care by sending flowers

Posted Dec 09, 2020 at 01:33pm
We are saddened to learn of the loss your family has suffered. Prayers to move through this difficult time and prayers for peace.

Posted Dec 08, 2020 at 09:06am
My Sincere Sympathy to the Hines family. Jody was a great person and friend to me. I will truly miss his humor and his smile. R.I.P my friend.
Anna Marie Swearengin
Comment Share
Share via:

Posted Dec 07, 2020 at 06:08pm
have alot of good memories with Jody from baling hay to hunting deer. He was always there for John and his brother Jeff. He will be missed not only from his family but by many who knew him. Dennis Shipman
Comment Share
Share via:
RS

Posted Dec 07, 2020 at 02:21pm
Jody, You were an inspiration to all who knew you. We will never forget you and your ability to make friends and your championship fishing skills.

Larry and Jackie Fliss, Carter and Jackson purchased flowers and planted a memorial tree for the family of Ralph "Jody" Hines. Send Flowers 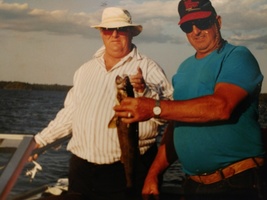