To share your memory on the wall of David Mine, sign in using one of the following options:

David was born on July 26, 1957 in Lafayette, Louisiana to Bobby Charles and Pearly Ann (Montet) Mine. David grew up in Louisiana and graduated from Carencro High School in 1975. He worked at Arrow Industries in quality control. David married Christy Epperson on December 11, 2010 in Gadsden, Alabama. He like to fish, NASCAR and watching Alabama play football. 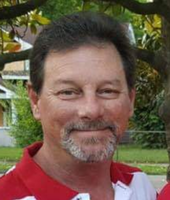