To share your memory on the wall of Daniel Henehan, sign in using one of the following options:

Print
Daniel James Henehan unexpectedly, yet peacefully, passed away at his home on January 11, 2021 at the age of 69.

Dan was born on September 18, 1951 in Kansas City, Missouri. He attended St. Elizabeth’s grade school and graduated from R... Read More
Daniel James Henehan unexpectedly, yet peacefully, passed away at his home on January 11, 2021 at the age of 69.

Dan was born on September 18, 1951 in Kansas City, Missouri. He attended St. Elizabeth’s grade school and graduated from Rockhurst High School in 1970. He attended UMKC and later graduated from Tulsa Welding School. He was a proud member of the Plumbers Local #8 where he was mentor and trainer for over 25 years; wherein there existed three generations of family tradition including his brother Pat, his father Bernie, and his adored grandfather “Big Jim.”

Dan met his wife Kathleen (VanSchoelandt) in 1973, where his incredible blue eyes and terrific sense of humor captivated her heart. They married in 1975 and built their home in Gardner, where they raised two amazing daughters. For many years, he was actively involved with the Knights of Columbus. He loved to help people and was the first to offer his skills to family, friends, neighbors, and strangers. He was involved with Habitat for Humanity, and Christmas in October with his daughter Judy.

Dan acquired his love of nature during visits to his grandparents’ farm in Metz, MO and as an Eagle Scout. He was actively involved with the Missouri Native Plant Society with his brother Bernie in Clinton, MO. Master of the dad joke, Dan was known and loved for his tremendous sense of humor and kindness. His skill of knowing just the right thing to say could lighten a moment, cheer on his daughters and their teammates, or captivate you in a good story.

Besides his daughters, his grandchildren were the light and pride of his life. He was working extensively on a family genealogy project to preserve names and faces of cherished loved ones going back several generations. He is preceded in death by his parents Bernard T. Henehan, Sr. and Venice Ellen (Charles). He is survived by his wife, Kathleen – Children: Jovee Walker (Chrissy) and Judith Conley (Clark) – Grandchildren: Dean Conley, Freya Conley, and Troy Walker – Siblings: Judy Ernst and Family (Katy, TX), Bill Henehan and Family (Quincy, IL,) Bernie Henehan and Family (Clinton, MO), Pat Henehan and Family (Kansas City, MO).

A memorial and burial will take place later this year when it’s safer for all to attend. He will then be laid to rest alongside his parents, grandparents, and great grandparents at the Balltown Cemetery in Horton, MO. The Bruce Funeral Home website will provide an update with ceremony time and location. Arrangements: Bruce Funeral Home, 106 S. Center, Gardner, Kansas 66030 (913) 856-7111. Condolences may be left at www.brucefuneralhome.com

Receive notifications about information and event scheduling for Daniel

We encourage you to share your most beloved memories of Daniel here, so that the family and other loved ones can always see it. You can upload cherished photographs, or share your favorite stories, and can even comment on those shared by others.

Posted Jan 23, 2021 at 01:47am
The outpouring of shock and grief at the sudden loss of our dear grade school classmate has been phenomenal.
His generous, kind heart and legacy of giving are recognized by all, and his ready smile and fun-loving spirit will never be forgotten.
Dan was a staunch supporter of our quarterly class gatherings and regularly emailed us nostalgic trivia and humorous anecdotes and jokes.
Losing this thoughtful and caring man is like losing a family member ~ a heartbreaking loss to all.
Without the gravitational pull of Dan’s large heart, all of our orbits are a little wobbly.
The personal loss of his lifetime friendship will be felt for the rest of mine.
Our heartfelt sympathy to Dan’s family and friends whose lives he touched.
Glory Ann Penington
St. Elizabeth’s grade school class of 1966
Kansas City, Missouri
Comment Share
Share via:
G1

Posted Jan 23, 2021 at 01:01am
With heartfelt condolences to family and friends, Dan is in our hearts forever with loving memories. 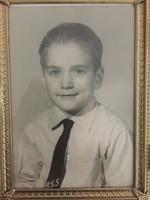