To share your memory on the wall of Robert McEwen, sign in using one of the following options:

Robert served eight years with the Arkansas Air National Guard and rose to the position of Chief Observer in the Weather Flight. In 1955, Robert completed the sixteen weeks weather school at Chanute Air Force Base in Illinois. In 1959, he was employed by the CBS television affiliate in Little Rock, AR as a TV weatherman.

On June 28, 1969, Robert married Deborah Priest in Little Rock, AR. Last June, they celebrated 51 years of marriage. He was widowed November 14, 2020 at her passing. Only 69 days later, he joined her in Heaven and is reunited with his beloved "Debbie".

Robert is survived by one sibling, Sandra Keeton of Sherwood, AR, Rebecca Skoog, his only child and five grandchildren. He was a follower of Christ, a devoted husband, loving father and grandfather and friend to many. He will be missed until we meet again.
Read Less

Receive notifications about information and event scheduling for Robert

We encourage you to share your most beloved memories of Robert here, so that the family and other loved ones can always see it. You can upload cherished photographs, or share your favorite stories, and can even comment on those shared by others.

Posted Feb 12, 2021 at 08:38pm
So sorry to hear of his passing. We have fond memories of his years with Dad at the training center.
Comment Share
Share via:
MR 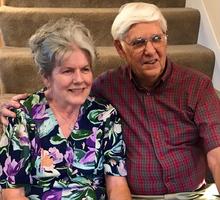