To share your memory on the wall of Michael Manns, sign in using one of the following options:

Michael was born Jan. 10, 1966 at Kansas City, KS to Charles David and Carol Ann (Anderson) Manns. He grew up in Shawnee and graduated from Truth Christian Academy, Lee’s Summit, MO. He later lived in Hillsdale and Spring Hill; moving to Gardner in 2008. Michael worked as a salesman for Napa Auto Parts. He married Tina Graves April 6, 1990 in Paola, KS. Michael enjoyed fishing and working on cars. He will be missed by family and friends.

Receive notifications about information and event scheduling for Michael

Print
Service at a future date.

We encourage you to share your most beloved memories of Michael here, so that the family and other loved ones can always see it. You can upload cherished photographs, or share your favorite stories, and can even comment on those shared by others.

Posted Apr 08, 2021 at 02:00pm
So sorry for your lose. I don’t know your family Tina, but used to work with Michaels Mom Carol at (Crown Lumber). Please extend my condolences to Carol please. Will be praying for the family. Ilene Arndt
Comment Share
Share via:
TR 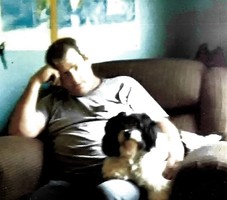