To share your memory on the wall of Gilbert \"Gib\" Keiter, sign in using one of the following options:

Gib was born on August 26, 1929 in Mt. Vernon, KS to Bernard Joseph and Josephine Veronica (Konecny) Keiter. He was the 5th of 9 children and grew up in Mt. Vernon, KS. He went to Saint Rose Catholic School through 8th grade but was not able to attend any further education due to the cost, helping with the family farm and World War II. He then took correspondence courses via mail from American School in Chicago, IL and received his GED in 3 years’ time. One of his passions was baseball. He went to the minor leagues in Wichita, KS and then turned down a chance to play for the Detroit Tigers in order to chase his other dream of flying when he joined the United States Air Force in 1951 when the Korean War was underway. He attended Radio Operator School, the Aviation Cadet Program and then served as a Fighter Pilot the remainder of the time. In his time in the Air Force flying jets, he earned the title of 2nd Lieutenant where he became a member of the Mach Buster’s Club when he exceeded the speed of sound in a USAF F-86 Sabre Jet. In 1955, he then joined the Kansas Air National Guard where he served for 6 ½ years and flew F80, F86, and F100 type aircraft and earned the title of Captain and Flight Leader. During this time he attended the University of Wichita and earned a Bachelor of Arts degree – Math major, in June of 1961. The next 30 years he worked with the Federal Aviation Administration (FAA) as an Air Traffic Controller and Automation Specialist/Supervisor. Places of duty included Wichita Tower, Chicago Midway Tower, FAA Academy for 4 years as an instructor in Oklahoma City, OK and Kansas City Air Route Traffic Control Center (ARTCC) in Olathe, KS. After his retirement he continued to work for the FAA as a contractor (DISC) for 10 years as a Lead Software Engineer/Site Manager. Other activities: 4-years on School Board of USD231, 3-years as AARP tax aide, High School Sacred Heart Religious Education Teacher 2-years, Divine Mercy Catholic Church Finance Committee 2-years as well as Church Executive Committee for an additional 2-years, volunteered with Catholic Charities in Olathe and was an active member of the Knights of Columbus for 50 years with 11 of those years as Financial Secretary.
He married Barbara Arlene Swoyer in Wichita, KS on May 28, 1960 at St. Mary’s Cathedral in Wichita, KS and was married for 61 years. They have 6 children - Kenneth B. (Liz) Keiter, Eudora, KS, Gerald B. (Christine) Keiter, Overland Park, KS, David F. Keiter, Overland Park, KS, Kathleen A. Smith, Osawatomie, KS, Cynthia M. (Michael) Paparella, Brighton, MI and Michael J. (Jamie) Keiter, Ottawa, KS – 17 grandchildren and two great-grandchildren.

Receive notifications about information and event scheduling for Gilbert "Gib"

We encourage you to share your most beloved memories of Gilbert "Gib" here, so that the family and other loved ones can always see it. You can upload cherished photographs, or share your favorite stories, and can even comment on those shared by others.

USD 231, Steve and Louise Adamson, and other have sent flowers to the family of Gilbert "Gib" Joseph Keiter.
Show you care by sending flowers

Guaranteed hand delivery by a local florist
U2

Posted May 23, 2021 at 12:44pm
I just now heard about Gib as we were out of town. Thank God for our faith and knowing where he is now. Bless your wonderful family with peace. Betty keller Chanay
Comment Share
Share via:
FO

Posted May 18, 2021 at 08:33pm
Gib was my wife’s great uncle and he and Barb were always so kind and welcoming. He was, to me, an active and spritely man who was willing to share knowledge, food, and a smile. I’m so glad I had the pleasure of knowing him!
Comment Share
Share via: 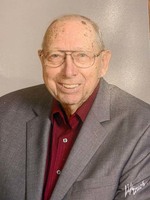